One setting I am absolutely planning on playing in eventually is that of Walmart: Apocalypse. On the surface it’s an insane, ridiculous setting filled with Mad Max style zaniness, but it’s also quite capable of shifting to be hardcore survivalist horror as well. I’ll talk a bit today about the setting, and what systems I’m planning on running it in.

In a nutshell, the idea of the setting is hundreds/thousands or more years in the future, Walmart has expanded to the point of literally covering the globe. It has replaced governments, farms, factories, and more, and nearly all people now live inside of them in apartments and housing inside, working for and buying from the omnistore. However, something went terribly wrong (A computer virus? A real virus? EMP? Nuclear devastation?), and the automated systems went haywire as what little society was left degraded and collapsed.

Humanity still survives, scratching out a living in the ever-present store. Robotic stocking machines keep the shelves filled and  patrol for shoplifters, while the poor survivors have none of the fabled substance, “muneeh,” with which to “biye” products and avoid the wrath of the stocker-bots for theft. People live on the shelves to avoid the sweeping and cleaning robots each night, but even that is hazardous, as the stocker-bots aren’t designed to detect if they’re about to drop a brand-new boxed Cadillac X23R45 on top of an empty shelf or a sleeping person on the shelf. Departments form huge regions, tessellating over countless acres of fluorescent-lit linoleum, and each often occupied by a local warlord or crude village.

People living in the different regions of the Wal, as it has now been dubbed, have adapted unique cultures and mannerisms. Tron-boys inhabit the realm of Electronics, cobbling together technology and lightning-based weapons from scraps and circuitboards. The realm of Sporting Goods is defended by occupants wielding the highly-coveted firearms named after the department, who religiously attend a ceremony known only as the “Superb Owl” in ceremonial regalia of sects like the “Packers” or “Cowboys.” There are even those who live in the sprawling rafters and support beams of the ceilings nearly a mile overhead, far above even the uppermost reaches of the shelftops, gliding about with ziplines and hang gliders made of dire sparrow feathers.

But the Wal is not without dangers either. The aisles are filled with roving brigands, slaughtering and looting as they please. Broken and cracked pipes release deadly steam, gas, acidic cleaners, or subzero coolant, while shelves in poor repair can topple and crush those caught beneath. Monstrous, mutated animals inhabit the cracks and holes of the building; Dire pigeons, rats the size of dogs, feral dogs the size of horses, predatory owls with a wingspan to rival an aircraft, and huge insects and other vermin inhabiting the shadows under the shelves.

The cults that worship the Wal itself, dubbed “The Smilers” by others, carve their faces into rictus grins and will happily murder those who damage, steal from, or insult their holy sanctuary. The Toy section is inhabited by half-mad children, in some cases centuries old but with minds twisted from use of the Age-B-Gone serums they’ve stolen from the Pharmacy section, and filling the aisles of the Toy department with intricate traps so they can capture and devour the unfortunates they catch. The Pharmacy section is a nightmare of medical science, with hulking aberrations stitched together  by the insane “doctors” wielding poisoned knives and scalpels. Worst of all is the unspeakable area of the Infant section, where a fog of baby powder obscures all but the eerie tinkling of off-tune children lullabies, where those who enter never return, and die screaming when they realize they are not alone in the powdery mists. There are the dreaded Greenthumbs of the Gardening section, murdering trespassers and using their corpses for fertilizer, and the oddly-perfect families of Home Living, who host a great deal of “friendly neighborhood barbeques” with an abundance of steak, despite being so far from Produce… 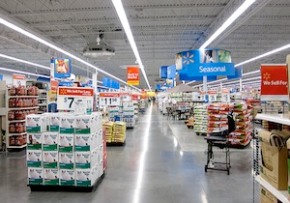 I heavily suggest using a Freeform Skills System for this game, as I highly doubt there’s a good structured system to cover all of the zaniness that’s possibly in the Wal. I personally plan to run mine in Simple D6 eventually, but that probably falls under the umbrella of the phrase “When all you have is a hammer…”

That said, one option I have strongly considered is Gamma World 4e, as enough of the weird and wild race combinations overlap with or could easily be refluffed to operate as members of the vestiges of humanity in the Wal. A D&D Modern system like Ultramodern4 or the Modern module of Microlite20 might work, but if you know of a good apocalypse-setting RPG, that might work much better for your purposes. The nice thing with the Walmart:Apocalypse setting is that it’s very easy to crank the dial between “hardcore horror survival” to “zany weird fun” without breaking the setting, and so I strongly recommend this setting to anyone looking for a novel apocalyptic setting for their next RPG session.